Using an inexpensive 3D printer, the creators were able to develop an elastic membrane made of a soft and flexible silicon material. This membrane is made to match the shape of a patient’s epicardium – the outer layer of the heart wall.

The researchers then printed small sensors onto the membrane. These are made of semiconductor materials, including silicon, gallium arsenide, gallium nitride, metals, metal oxides and polymers.

The sensors are able to measure a number of markers of arrhythmia – a condition characterized by problems with the rate or rhythm of heartbeat.

“We image the patient’s heart through MRI (magnetic resonance imaging) or CT (computed tomography) scan, then computationally extract the image to build a 3D model that we can print on a 3D printer.”

There are already similar devices available that are 2D. But the researchers say because such devices are unable to cover the full surface of the epicardium, they can produce unreliable results. 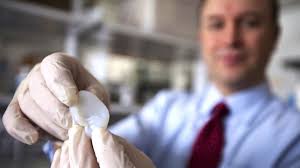